Summer is not over yet. There are still festivals and barbeques. With butterflies… and wasps. Many people consider wasps ugly and useless. However, researchers from the University of Eastern Finland and the Finnish Museum of Natural History (Luomus) don’t think so. Let’s see what makes these insects so interesting!

Wasps aren’t just annoying creatures. They provide many ecosystem services. For example, they help in flower pollination, hunt agricultural and garden pests, protect crops, and regulate food chains. Furthermore, they have developed conspicuous colouration as visual signals to predators. Birds know that it is dangerous to hunt insects that are yellow and black. So, wasps’ stripy appearance also has a protective value for many other insects, such as beneficial hoverflies, which mimic wasp colouration. 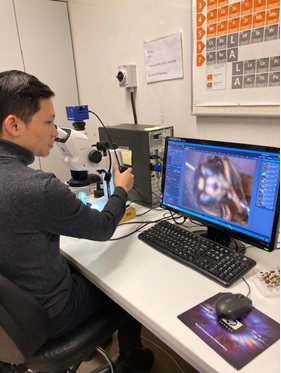 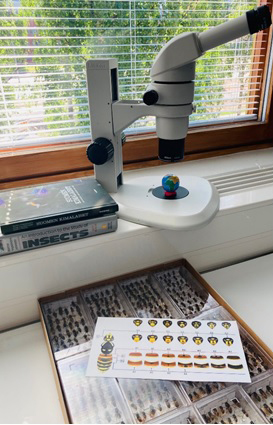 “Climate change affects insect and plant physiology and their interactions with each other in many ways”, says leader of the Environmental Ecology Research Group (EERG) Professor James Blande. When it is getting hot, we change the clothes we wear. But what about insects? Do they have a chance “to change clothes” in the face of climate change?

Master’s student from the EERG Quang Nguyen was intrigued to find out if changes in the size and colouration of the rare and red-listed red wasp species (Vespula rufa) have occurred during the last century. For that purpose, Quang and his supervisors Dr. Oksana Skaldina and Dr. Oluwatobi Badejo used museum collections borrowed from the Finnish Museum of Natural History Luomus. Altogether, the collection contained 392 wasp specimens sampled between 1865 and 2004 by many Finnish entomologists. It felt like a magic tour through history to find specimens collected by famous late researchers, such as Antti Pekkarinen or William Nylander, who inspired us through their publications!

Wasp specimens from several locations in Finland were digitally photographed at the SIB Labs unit of the UEF. These insects were not uniformly striped but varied in the colouration of their faces and bodies. Do red wasps have their “preferred fashion style” – the most widely spread trends or varieties? Indeed, they do. There are very common varieties, but also those which were extremely rare. Overall, results of the Master’s project revealed that during the last century wasps appeared to get smaller and to possess paler colour variations. That lightening was associated with climatic conditions. This trend has earlier been shown for other insects such as butterflies and dragonflies. But for the first time, UEF’s researchers have revealed that for wasps! “It is important to use museum collections for ecological research purposes, as we can look back into the past and anticipate future trends!”, says Juho Paukkunen, curator of insects’ collections in Luomus.

The project was financially supported by the Kuopio Naturalists’ Society (KLYY).

To summarize, wasps are fashionable, smart, and multitasking! So, when a wasp comes to your home, garden, or barbeque, please don’t be quick to kill it. Who knows, maybe after a hundred years it will be found in the “box of wasps” and will convey important information on climate change to the next generation of enthusiastic researchers!