ENCOUNTERS FROM THE COAST TO THE MOUNTAINS IN JULY 2018

In Brazil as elsewhere the pollution and disappearance of sweet waters and aquifers is a growing problem. In the surroundings on metropolitan Belo Horizonte I visited São Gonçalo de Bação, located in Itabirito. The village lays between mountains rich in iron and other minerals, eucalyptus plantations of the region providing wood for iron smelts. The village is rich in fountains and mineral sweet water sources, that are now severely threatened by advancing iron industry.

I conducted an open sensobiographic interview with a local geographer Icaro Brito, who introduced a plan for revitalization of antique water points, chafarizes, that have provided the population with fresh spring water since the beginning of the 20th century. Six of these are still functioning in São Gonçalo. As the habit is, we drove around by car, stopping once in a while to greet family, friends and neighbors through the window. The video shows bits of the interview and presents the sensobiographic method in Portuguese. (Publication permission granted by the participants.)

How can a city be mapped sensorially? Professor Regina Helena Alves da Silva from the Centre for researching the convergence of new media (Centro de convergência de novas mídias) in UFMG has some answers for this question. We had the pleasure of hosting her in our fieldwork in Turku in June, where she got familiarized with our method, walking with local people in their city with us. Regina Helena has conducted urban sensory mapping workshops with different groupd of people around Brazil. Participants have learnt to map their urban surroundings by writing, filming, recording and sketching. The stories and perceptions produced bring out both imaginaries and a lived environment so often excluded from the master narratives that municipal planning is used to listening to. Besides discussing our common interests and the significance and impact of digital media technologies in contemporary lives, Regina Helena took me to sense the Central market of Belo Horizonte, a colourful fair of world famous artesanal cheese, local food, handicraft and spices: a kind of sensorium of Minas Gerais.

The voice of the slum hills: Radio Favela 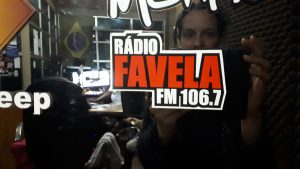 Radio Autêntica Favela is a channel for the marginalized, predominantly black and poor population residing in favelas. The radio station is placed on top of the hill of Serra, a conjunction of different favela slums with tens of thousands of inhabitants. The founder Misael Avelino and his crew have kept the radio on the air already for 40 years, despite police persecution, especially during the military dictatorship, and financial difficulties. The radio brings out the voice of the local population and their problems that remains unspoken by other channels.

In the picture, a breezy winter night in Favela da Serra glows in moonlight. Amazing views over the city combine with precarious living conditions for most inhabitants in a neighborhood where main routes are marked by the constant presence of drug dealers.

In the town of Santa Luzia in metropolitan Belo Horizonte, I conducted a sensobiographic walk with a family of friends of three generations. The walk was led by dona Izabel, 77, one of the first inhabitants of the newly built habitational area Cristina in 1981, with her family of six. She agreed to walk shortly around the nearby street, supported by myself, her older daughter, and one of the three grandchildren accompanying the walk, of whom the oldest, 17, was holding the camera. A striking feature of the walk for me was familiar from the many times during past decades of walking in the area with members of the family: the stories. Histories of local people, the often dramatic twists in their lives, or just the simple perceptions of who lived where and what had happened to them, their houses, their trees. A central sensorium of living becomes defined by the inhabitants and neighbor relations, adequate to a habitational area that had acquired intimate history during the decades of living.