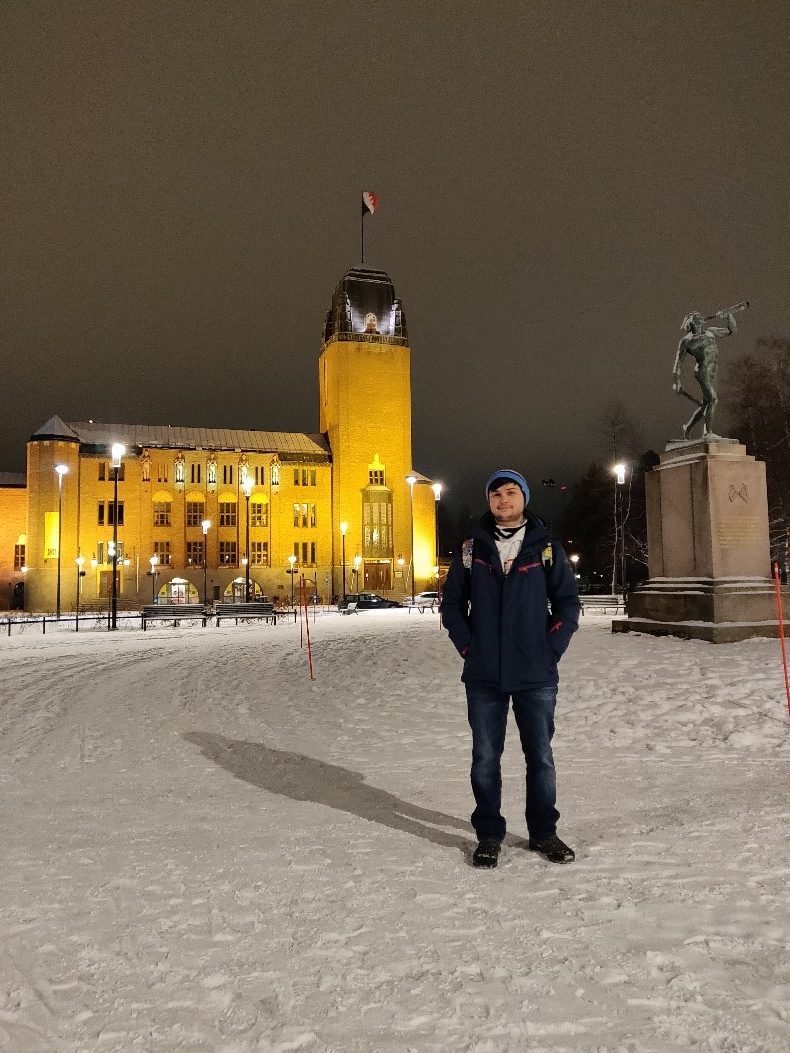 Hello everybody! I am George, a thirsty for knowledge 23 years old romanian computer science student. Upon reading that very first statement about me you might wonder: “well, isn’t there any better place out there in the world to quench you thirst for knowledge other than Finland?”. The answer to this previous question (that I actually got asked quite a few times by friends and relatives) is a very big and sincere “NO” and in the next few lines that I will share with you I will explain to you why this is the case.

I’ve already been studying at UEF for the past 3 and a half months and when I was asked to write about how my “typical” week goes around here I immediately realized that my task, even though it might seem rather easy, is in fact quite difficult. This is mainly because I cannot seem to find a fit for the word “typical” in anything related to how studies and student life unravels itself in Joensuu: almost every single day there is something new and exciting happening and so every week just becomes unique in its own way. Now that we’ve cleared from the beginning that it would be a mistake to label any single moment of studying at UEF as being common, I still tried and gave my best to describe how a “typical but not-really-so-typical” week looks like for me studying in the capital city of North Karelia.

One of the best things about being a student at UEF is that you have the freedom to build your own study schedule by picking only the courses that you really like and fitting them in exactly as you want in your overall schedule. I’ve always enjoyed having kind of a slow start to every week so imagine how nice it felt when I realized that my schedule for the current study period turned out to be in such a way that I have no actual classes to attend to on Mondays. I usually take advantage of all this free time that I get on Mondays to catch up with any assignments and studying that I have due for the rest of the week. 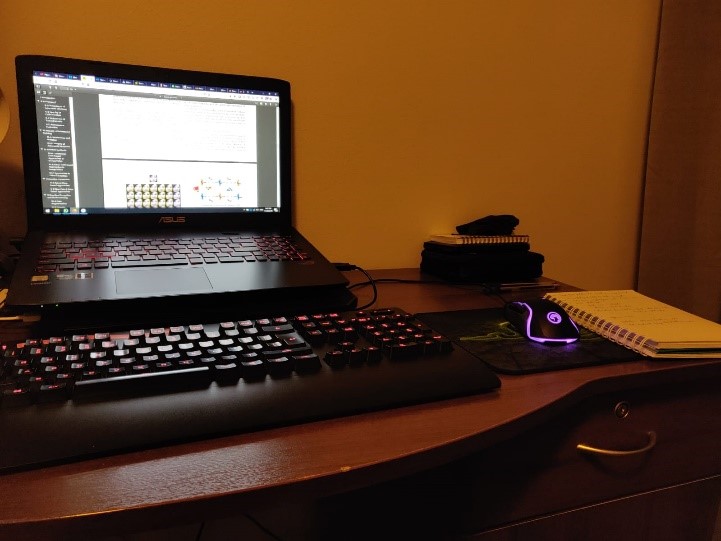 The study corner in my room, where I spend almost all of my time when I am not at university.

On Tuesday my “official” week of studying actually starts (at least when considering the current study period) and usually on this day I have a couple of classes so I spend almost half of my day in the Science Park (where almost all the IMPIT classes are taking place). What I really enjoy doing right before taking on a full week of hard work is to try and clear my mind and get myself into a calm mindset and there is no better way of doing that other than just losing yourself in the peaceful surroundings of Joensuu. It really isn’t that hard to find that small moment of peace and silence for yourself, when even the stop where you wait for the bus provides such a nice winter picture. 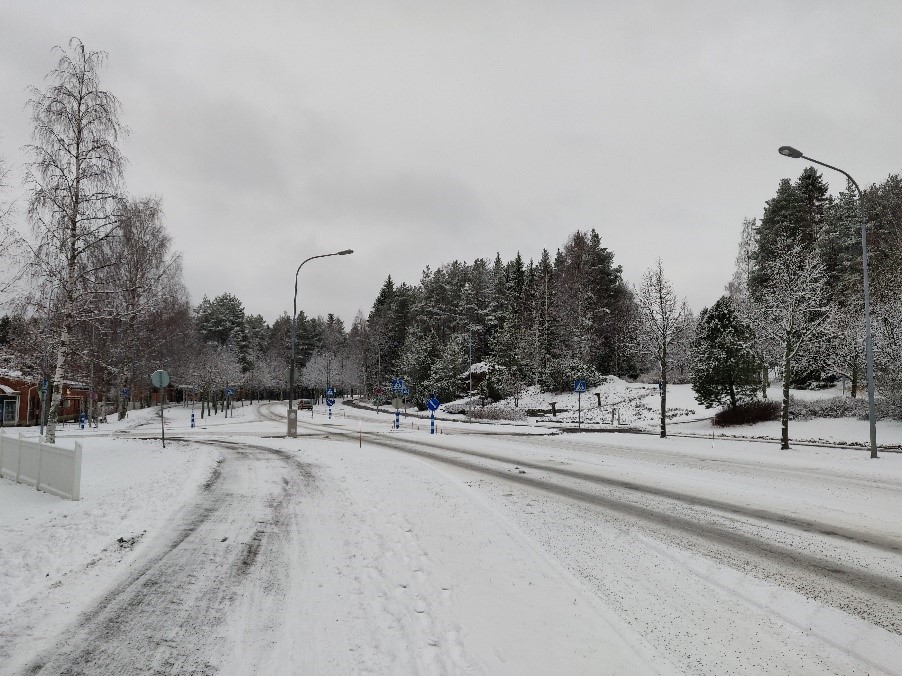 Given that on Tuesdays all my classes start after 12, I always try and have my lunch before attending them (because we all know you can’t really think on an empty stomach 🙂 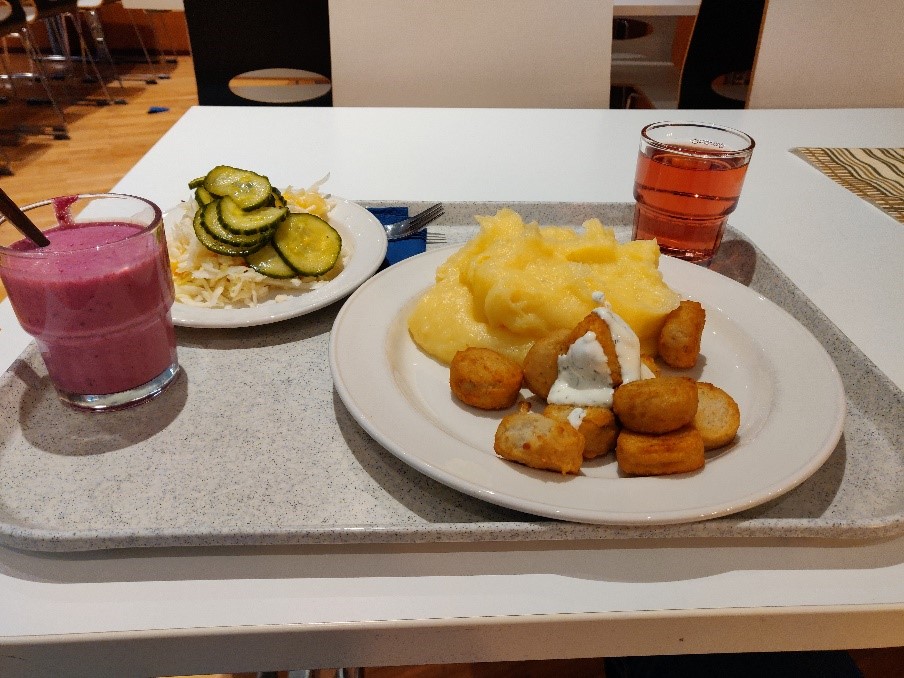 Just an usual lunch at the Louhi student cafeteria in the Science Park.

After grabbing lunch I go straight to class, where I try and make the most out of the freshly acquired “food for thought”. All the courses I’ve taken so far have been truly engaging, so it’s really hard to lose focus during any class. 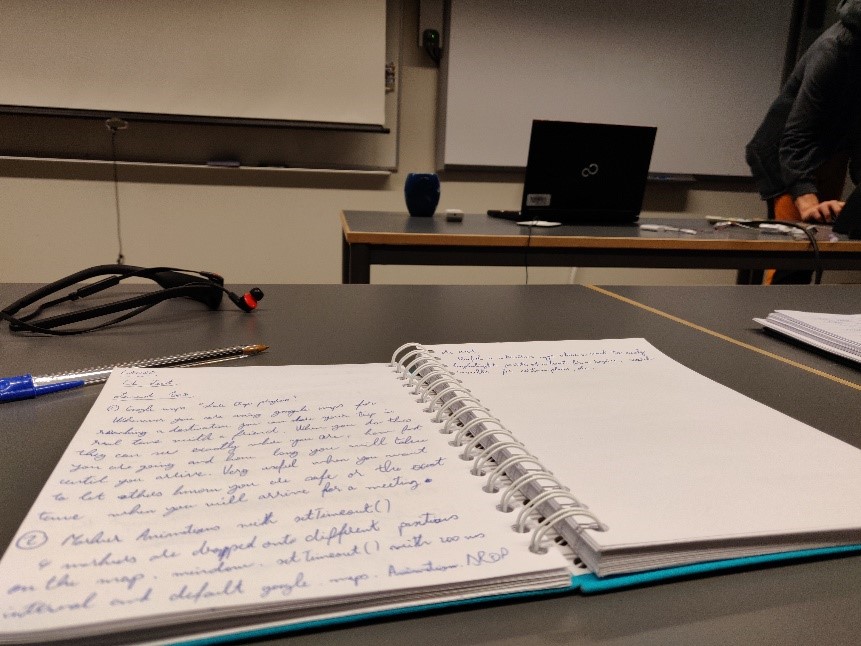 Getting ready to acquire some fresh information.

Usually this is all I’d have to say about my “usual” Tuesday but remember what I said about everything at UEF being far from typical? Every other week here in the IMPIT program we have a special lecture called “IMPIT seminar” and what we usually do throughout these classes is we get to learn about research groups in the Computer Science department. On the specific Tuesday that I decided to write this we visited the Spectral Imaging Laboratory where we got acquainted with the equipment that they use and the research topics that they tackle at the moment (topics which we could also choose to work on for our Master’s thesis). 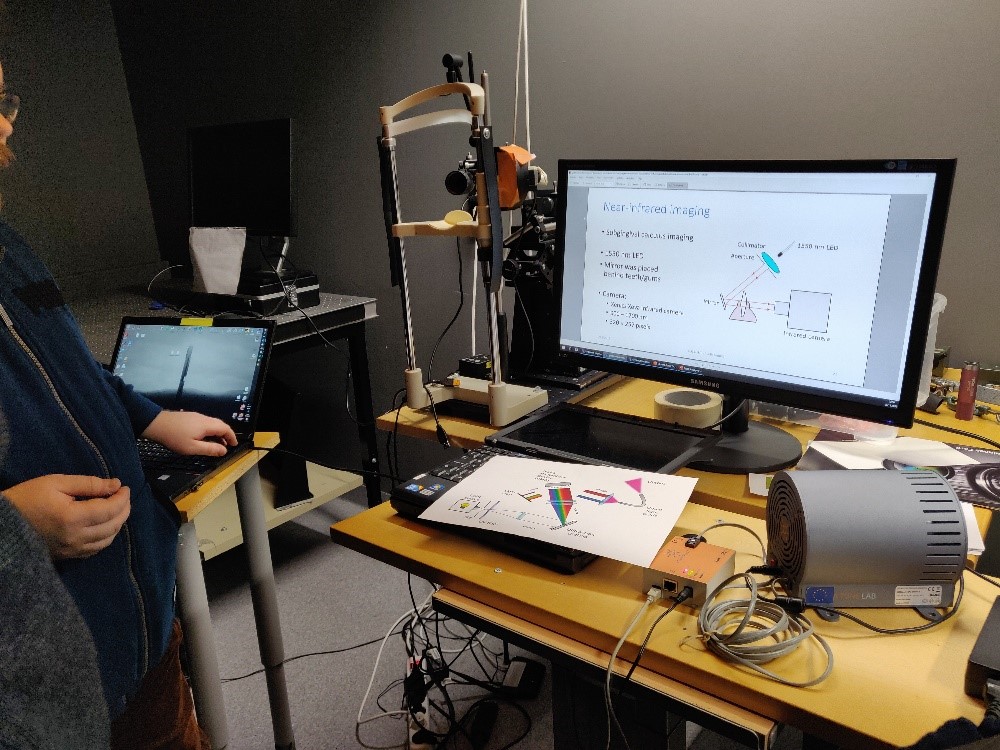 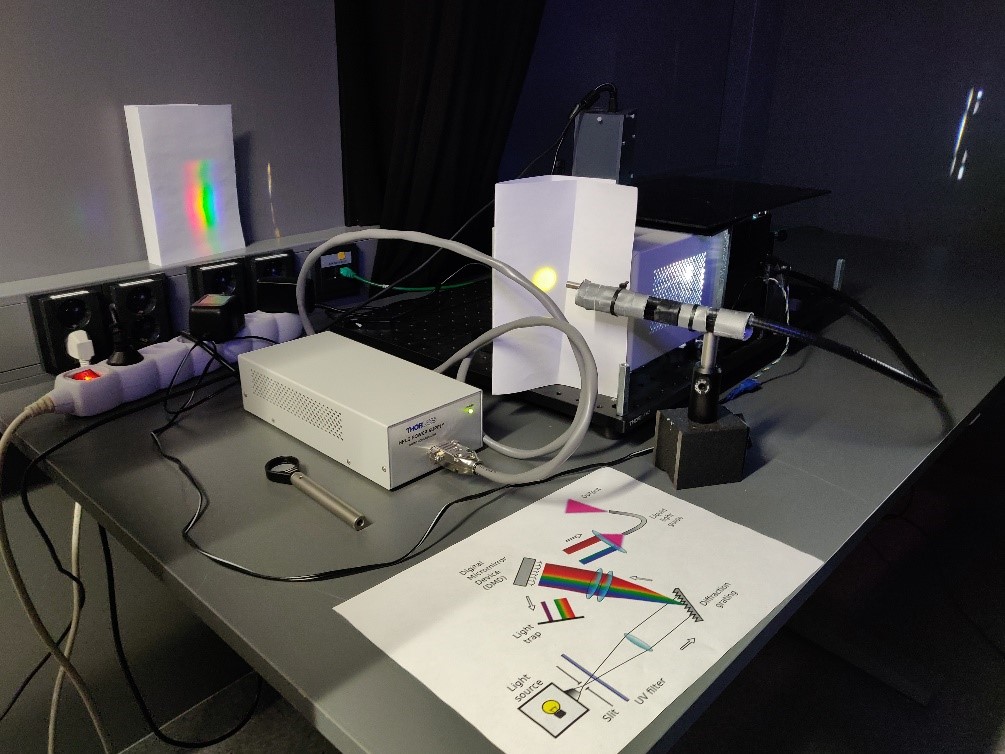 A small sneak-peak into the spectral imaging laboratory.

Wednesdays are the most packed days for me during this period, as I’ve got classes from 8 AM to 7 PM (I know it sounds like a bit too much but believe me, it’s worth the sacrifice when you know that you get to be much more relaxed for the rest of the week). On this Wednesday however, I got a bit of a treat at the end of a long day of hard work as there was a very nice Christmas party organized in Science Park for all the students that took part in a course called “The Epic Challenge”, which is organized by UEF in partnership with NASA (yeah, you’ve read that right :D) and where we get to work in teams and develop solutions for (possibly) living on MARS (that’s pretty EPIC if you ask me). Add an amazing party on top of developing ideas for living on Mars and you get me hooked for sure! 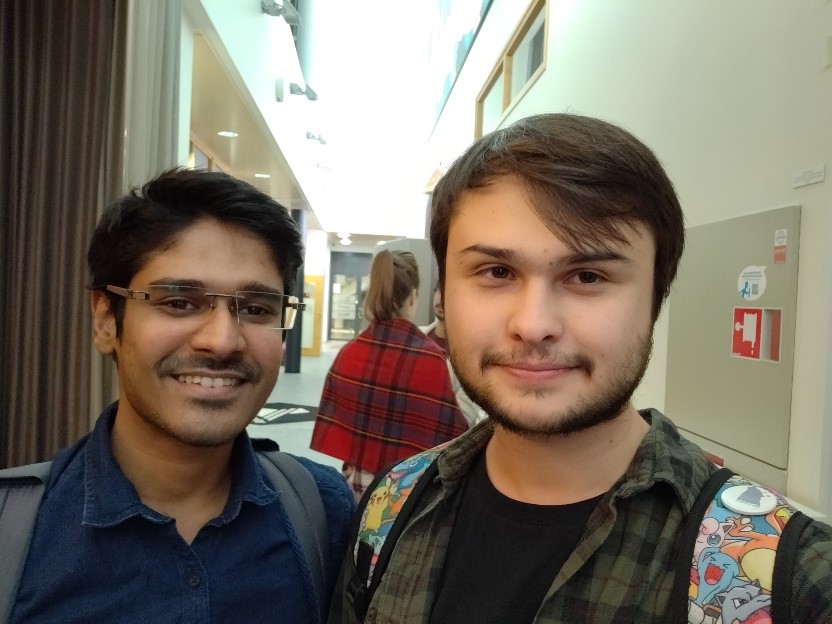 Me and a good friend, Mohammed, at the EPIC Christmas party.

Thursdays aren’t really too much of a thrill, apart for some usual classes, but as you might have already guessed, there was something special happening on this particular Thursday that I will be telling you about! I have already told you about the “Epic Challenge” course and I know it may already sound like it’s too good to be true but on top of everything I’ve already told you, at the end we also get to do some very interesting experiments that are meant to assess how viable actually are the ideas that we actually came up with during the course! This is exactly what I did on this Thursday: I met up with the other members of my team and worked on 3 different experiments, one of which consisted of us trying to simulate how a rover would cope with the irregularities of the terrain on Mars.

Testing how a rover would do on a scaled-down version of Mars terrain imagined by me and my team.

Given that I like starting my week on a slow and calm pace, this is also the case for the end of the week. Because of this, I have only one class on Fridays, as it would be really hard for me to try and stay focused on more than that.

What I enjoy doing the most at the end of every week is to take a walk in the city center, by the river, to just clear my head of all the stress accumulated over the past few days. I find that this has helped me very much cope with the occasional hardships of being far from home and getting used to a whole new living and studying environment. And I have to admit there is nothing more soothing after 5 full days of work and stress than just losing yourself for a couple of minutes in the beautiful night lights of the city of Joensuu.

“A week of studying at UEF” – see George’s video on YouTube!