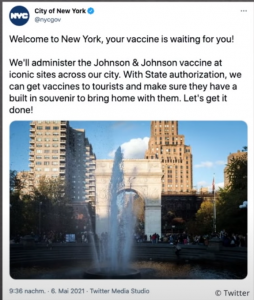 “What would you have done?” It is a famous phrase of former Mexican president Peña Nieto, repeated today sarcastically when we talk about dilemmas. Who to vaccinate first? Is the decision to “not get vaccinated” valid? Is it okay to travel from Mexico or Colombia to the USA to get vaccinated? Those are among the various current dilemmas when discussing the application of the COVID19 vaccine. In this blog post, I want to discuss the legitimacy of likely responses in a country like Mexico.

The Vaccine Shortage and the Bioethical Dilemma

Any “triage” decision –known as the medical protocol for classification and care priority, based on the possibility of survival, therapeutic needs, and available resources– involves bioethical evaluations. The priority of assigning respirators became an issue, as much as nowadays deciding who to vaccinate first. It began with health personnel in most countries, particularly with the so-called “front line” of the Covid19 battle. This is a clear allusion to the military language commonly used to talk about diseases, just as Susan Suntag in “Metaphors and their diseases” reminded us. Immediately, elderly adults were also considered due to their greater vulnerability to the virus.

In Mexico, people also discussed prioritizing professions as a primary necessity (e.g., teachers and journalists). But the idea of vaccinating the cleaning and security personnel or food provisioners was out of the public discussion. It is important to remember that Mexico’s City Central Wholesales Market (Central de Abastos) concentrated high infections and deaths. Likewise, the current government of Andrés Manuel López Obrador decided that he and the heads of states would “wait their turn,” as a political statement: “no one is above anyone.” The cost of the decision was that he and several other governors contracted COVID19.  Another controversy emerged when health personnel from public institutions was vaccinated but not those working in private institutions.  Such distinction was not applied when vaccinating academic and administrative personnel in educational institutions.

However, many vaccinated teachers will not return to face-to-face classes. Either because their programs allow them to continue with online courses or because union leaders have stated the unwillingness to return to face-to-face sessions until all students are vaccinated work at public universities. Knowing the above, should healthy teachers have given their turn to the vulnerable population? Should the state have decided the distribution of vaccines differently? Why not prioritize risk groups (e.g., people living with autoimmune diseases or immunodeficiencies) in the vaccination scheme?

According to data from Jorge E Linares (Nexos, May 1, 2021), “the WHO indicates that some 300 million doses have been administered, still far from the 10 billion doses needed to immunize 70% of the population worldwide, minimum to achieve herd immunity”. On a regional scale, in the USA, 90 doses per 100 people have been applied, while in Mexico, only 27 doses per 100 people as of May 31, 2021. Mexico City Head of Government Claudia Sheinbaum stated that by June 5, 43% of people over 18 years old in Mexico City received the vaccination with at least one dose. Not so bad news, if we compare with other countries with greater privileges and willing to give vaccines as diplomatic exchanges. The USA government, for instance, recently announced that it “shares” with Mexico a million Johnson & Johnson vaccines.

For some, the vaccination rate in Mexico is a failure attributable to the new government. For others, it seems like a structural symptom of geopolitics that has imposed an unequal distribution of vaccines worldwide, as the BBC systematizes. Any balance must place the United States at the center due to its influence on the business decisions of the pharmaceutical companies and research centers that produce and supply the demand for doses.

So far from vaccinated, and so close to the United States

At the end of January 2021, Juan José Origel, a Mexican television communicator, shared on social media that he received the vaccine in Miami. At the time, the vaccination schedule for the general population in Mexico was unknown, and in the United States, it had just begun. He was criticized for opportunism, particularly for the tone of disdain with which the character referred to the episode, proud of having broken the rules because he could.

But today, this is an increasingly common practice: traveling to the United States to get vaccinated. This reaction has antecedents in dishonest ways of getting vaccinated by those who somehow sped up their inoculation process and their close social circle before it was available to the general population.  Although some case in Mexico were reported, they did not reach the scandal levels of Argentina (#VacunasVIP), Spain, or Peru (#Vacunagate): where high-ranking officials were evidenced (presidents, former presidents, ministers, majors together with their families), some even having to resign, after failing to comply with the vaccination order that each country designated.

Just a few months later, vaccines from different pharmaceutical companies with varying percentages of efficacy to avoid infection, symptoms, and complications have been applied globally with diverse levels of coverage. The United States has vaccinated its population the earliest, being the beneficiary of the most significant number of doses. Today they are even representing a surplus in relation to its demand. The German media broadcaster Deutsche Welle (DW) declared hundreds of discarded vaccines and up to 300 million doses without a request. If the estimation is accurate, so far, it would be the same number as the doses administered worldwide. A hoarding that does not seem to generate the international commotion it deserves.

With this panorama, it is worth asking who has not yet been vaccinated in the United States? Some indicate that large cities concentrate the dose supply, and residents in remote territories are still waiting. The most unvaccinated population corresponds to those who do not wish to do so. Should the decision not to be vaccinated be respected, putting individual freedom before public health?

With the oversupply of vaccines in the United States, the requirements to receive them became more flexible. Proof of residence document is no longer required, and in some cases, not even an ID, to encourage vaccination among the migrant population without documents. Thus, what at first several local governments had condemned (at least Texas, Florida, New York, and California spoke out against it), little by little, has been seen as an economic reactivation opportunity.

Various media denied the rumors about fines and the Visa suspension for people receiving vaccination but were not residents. Thus, authorities began to invite tourists to get inoculated directly. The regularization of flights and the reactivation of up to 70% of travel packages to the USA show a growing “vaccine tourism.” The plan is more popular, and several companies offer their employees in Mexico to cover travel costs for their vaccination and many a combination of vaccination plus vacation. It is estimated –perhaps conservatively due to the secrecy of the data– that half a million Mexicans have traveled to get vaccinated. Five million more will do so this summer, mainly with the opening of the land border.

The vaccines in the USA are provided inside pharmacies or supermarkets without the collective euphoria typical of vaccination days in Mexico, generally held in symbolic facilities such as public universities. Nevertheless, the figures are significant if we consider that approximately 22 million people had been vaccinated with 31 million doses by the end of May. That is, only 12.6 million people in Mexican territory have received the two doses to complete immunity, according to figures from El País. In other words, half of the goal achieved so far by the state could be performed outside the borders in the coming months.

On vaccine inequalities and moralities

The decision to travel (or not) to the USA to receive the vaccine deserves a reflection from different perspectives: a geographical consideration, the economic access to travel for vaccines, and the access to a USA visa. First, it is not the same to make the trip to the US from border states than from the center of the country. Furthermore, people living close to the border are used to daily crossing for various purposes (e.g., wholesale purchases, buying clothing or gas for a better price). Crossing the border to get vaccinated feels instinctive, as it does not involve excessive spending.

Secondly, the recurring idea is that only the elites can afford this option. A return flight in a low-cost airline to the United States from the CDMX costs approx. USD 250. The prices and the time invested may impede most of the population from this kind of solution. However, some middle-income sectors may consider the opportunity by making an ‘economic effort.’

Thirdly, access to USA visas imposes differences. People in the informal economy with purchasing power may be systematically rejected.  Others cannot even cover the cost of trying to get the document. It is precisely the unequal access to the possibility of being vaccinated, the center of the dilemma that this practice represents.

Some voices suggest traveling to the US for this purpose is to contribute to the reproduction of unequal distribution of doses. Like a consumer who avoids a product, with the legitimate intention to not contribute to replicating unfair production conditions (e.g., fair trade, environmentally friendly, free from slavery or animal abuse, etc.). This consumer knows that such a decision won’t stop such production or stop others from consuming. It is a form of protest that is as legitimate as it is honorable.

It is here where the discussion enters a diffuse scope because although the vaccine is free in the United States, its distribution is not governed by the laws of the free market.  Not everyone who wishes can finance the trip to receive it. The travel costs mark the inaccessibility to the vaccine. It imposes mercantile values on public health and moves it away from universal access good of public interest. As long as the entire supply is not guaranteed in our country, alternative ways of accessing it will continue.

Even when moving ahead in the process is a reason for shame or reproach. It is convenient to bring back the honor that comes with the sacrifice of not consuming, in this case, a vaccine. There is a particular “honor” in waiting their turn that the state apparatus arranged according to its resources. There is honor in respecting the rules imposed for everyone, without privileges. But, can we do it once again if the Mexican state has already withdrawn many responsibilities (e.g., limited security, education, or health)? Is the decision to vaccinate reprehensible if the personal benefit represents, at the same time, a collective benefit? How honorable is it to wait for conviction when there are options?

As Fernando Escalante said in his column The vaccine, the morality “(…) in this case, staying in the trench has no other effect except to remain exposed to the virus, without resulting in any gain.” And although this kind of companionship, loyalty, and empathy towards those who, because of their profile, have not received the vaccine, is honorable, it is still a weak position in the face of a virus that takes lives and compromises their quality.

We can think of both profiles from a position of moral superiority: those who travel to get vaccinated and those who criticize it. The firsts are convinced that getting vaccinated contributes to mass immunization; their decision is noble. In contrast, the others may be confident that their patient attitude ensures order and equitable conditions for the country. It can also be the opposite; those are getting vaccinated to return to a “normal life” while the others angrily reproach the privileged ones as a matter of social revenge. Or there may be many nuances between these ways of reacting to risk. What would you have done?

*Lidia Malagón is a sociologist and PhD candidate at the National Autonomous University of Mexico (UNAM). In her research, she focuses on urban conflicts and urban planning instruments.

Research Group based at the Department of Geographical and Historical Studies, University of Eastern Finland, Finland.