Images of Cuban medical brigades landing in Italy and the British cruise ship disembarking on the island after being refused entry to other Caribbean ports made the headlines on global public discussions on Cuba’s responses to the CoVid19 crisis. The government’s assertion on its success to combat the virus accompanies the equation, getting appraisal in academic circles. Simultaneously, the Revolution opponents use scarcity and energetic dependency to point out the unfeasibility of the Cuban model: the U.S. embargo is not the one to blame; it is “The Castros,” it is communism.

Trapped in between polarizing views, Cuban people have slowly opened globally visible spaces of discussion, thanks to the recent expansion of internet use (2014). Cuba’s slow-paced demotic turn —the increasing visibility of the ordinary person in the media— provides a window to look at how Cubans have experienced the CoVid-19 crisis. I want to call attention to two matters dominating discussions on internet platforms such as YouTube and Twitter: the inequalities propelled by the dual-currency monetary system and scarcity. For the last few years, Cubans have feared the advent of a second “special period,” the deep economic crisis that followed the socialist bloc’s collapse. The global pandemic has created the “perfect storm“ for a similar scenario.

The dual-currency system originated in 1994 when the National Bank of Cuba introduced the Convertible Peso (CUC) to replace transactions in U.S. dollars. The transition was completed in 2004. From the start, it became evident that Cubans with access to CUC had a clear advantage over those without.  Most people get salaries in CUP (Cuban Peso), amounting to around 25 CUC in 2020.1 A minority with a job in the service sector (waiters, taxi drivers, tourist guides, etc.) or with an entrepreneurial license can access CUC more easily. Remittances also guarantee the constant flow of “better” money.

In 2019, the Cuban government announced the opening of stores operating exclusively in MLC (“Moneda Libre Convertible” or freely convertible currency). Through an electronic card charged with U.S. Dollars, Euros, Mexican Pesos, Swiss Francs, or other coins, citizens could purchase electronic appliances, homeware, and even cars. Officials defended the decision as the best way to capture foreign currency necessary for imports and other financial operations. The process was documented by journalists, but also by Vloggers and YouTubers like Frank Camallerys and Pedrito el Paketero. The latter interviewed people on the streets, getting replies commonly present in other social media forums: “that is for people who have family in the Yuma (U.S.),” “I don’t get paid in foreign currency.”

In January 2020, before CoVid-19 made it to the Cuban news, the island’s economic prospects were already pessimistic. For Carmelo Mesa-Lago, this is the result of 1)a substantial cut of economic trade and aid from Venezuela, 2) the hardening of U.S. sanctions by the Trump administration, 3)the predominance of central planning in the economy. For Cubans’ everyday lives, the economic crisis translates into a rise in prices and scarcity of essential products. Even during the pandemic’s peak on the island, goods like soap were nowhere to be found.

During a fieldwork visit to Havana last January, queues outside supermarkets were a common sight. Yet, some habaneros I talked to remained somehow hopeful: the slow but steady growth of private businesses such as cafeterias, restaurants, bars, was a good source of income to many, either through entrepreneurship or employment (the emergence of the private sector in Cuba is also recent). The CoVid-19 crisis changed everything dramatically because most of those establishments depend on tourism. Initially, the government tried to promote Cuba as a CoVid-safe destination, taking advantage of the island’s medical sector’s solid reputation. The proposal awoke strong animosities on social media, and in the end, Cuba closed its borders. Tourism revenue plummeted. Reopening businesses during the late Summer did not improve the situation. Most Cubans cannot afford services initially designed for internationals. A shutdown of remittances is also likely. The government announced U.S.’s latest sanctions would force Western Union offices’ closure on the island, affecting those who receive money from abroad enormously.

However, what puzzles many Cubans to the point of anger is their government’s doing: when CoVid restrictions eased and supermarkets reopened, many were converted to MLC stores. Inaugurated in 2017, those supermarkets sold mainly imported goods at CUC prices, something already inaccessible for most. The new alternative limits, still more, access those same imports. Cubans have also denounced the lack of goods in CUP/CUC stores, contrasting with a better offer in MLC ones. If the dual-currency system was already the inegalitarian paradox of the Cuban model, MLC stores have added a brand new layer.

Scarcity may not be new for Cubans, and neither is it weak purchase power. A Cuban proverb states, “Cubans do not live from a salary; Cubans live from el invento.” An umbrella term for survival alternatives that rank from informal/black/grey market economies to remittances, upcycling, and favors, el invento has limits. Over the last years, the country has tried to steer apart from its historical trajectory as a sugar/tobacco economy to diversify crops. Mesa-Lago has suggested that for Cuba to survive these convulse times, the Vietnamese model could work: food self-sufficiency. Finding alternative sources of energy is also a “must.” Agricultural produce often spoils in the fields due to lack of transportation means. The cruel face of tourism also manifests in scarcity: lemons were easier to find in agromarkets once they did not end up in tourists’ mojitos.

The internet overture has enabled the visibility of Cubans that want to find sustainable and alternative solutions for their country’s development. One remarkable example is ”El Enjambre,” an independent Podcast discussing current issues created in 2019.  Undoubtedly, those voices have always existed, but they did not resonate so loudly. Many proposals often go beyond the socialist/capitalist dichotomies and require extensive social participation. Outsiders, need also to listen to those voices, to escape from the same dichotomies and accept that Cubans citizens are the ones with solutions to their problems.

Nadia Nava Contreras, M.A. is a project researcher at the John Morton Center for North American Studies, University of Turku. She is part of the CUBAFLUX project, financed by the Kone Foundation, where she investigates the impact of Cuba’s Digital Revolution in Havana’s urban configuration.

After a long break, we are resuming our special issue with Nadia Nava Contreras’ collaboration focusing on Cuba. So many things and events have had happened during 2020 regarding the pandemic since our latest post was published, therefore, we take the chance to invite all readers to our event related to the Covid-19 pandemic theme with environment, society and development issues in Latin America and the Caribbean, where Latinamericanist researchers in Finland will put together and make a balance on the situation during this year. The event will be on November 17, 2020, 4.00 – 6.00 p.m. (GMT+2:00 Helsinki time) via Zoom. More info here. Welcome! Bienvenidxs! 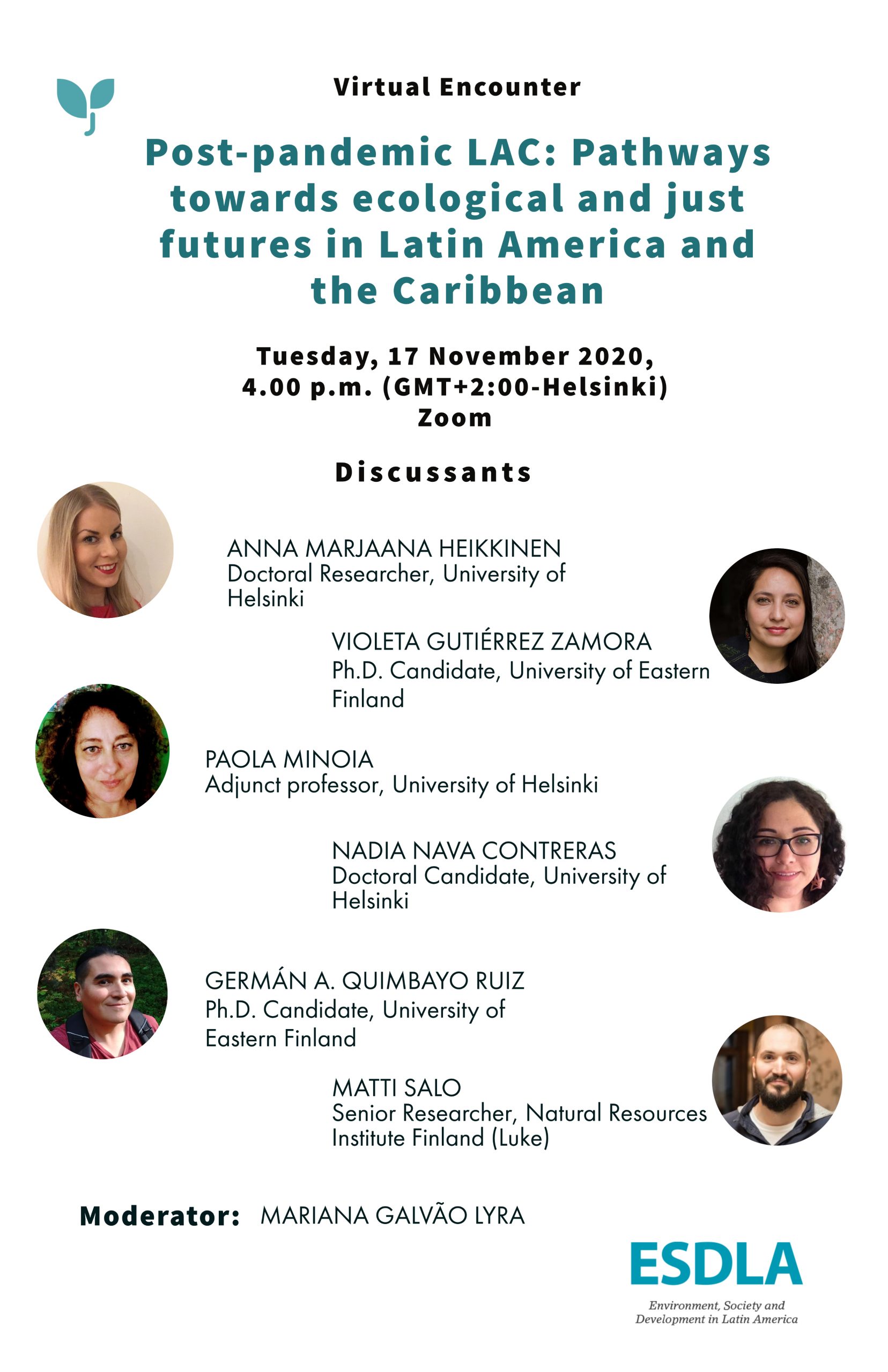