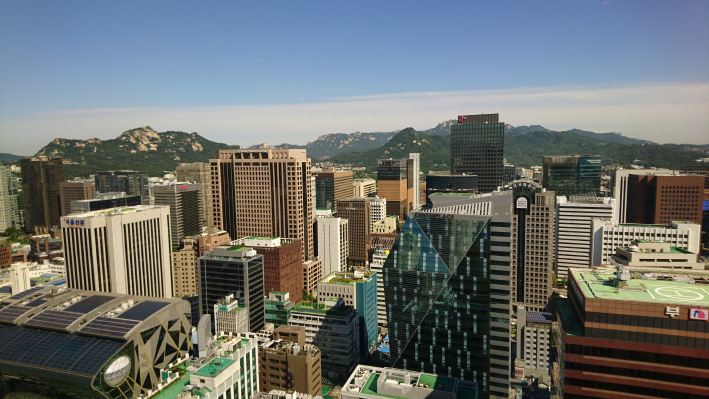 A view from the venue of the Biennial Conference of the Asian Society of International Law in Seoul, August 2017

Policies to address climate change and air pollution include potential for win-win solutions. Some pollutants, especially black carbon, have both a detrimental effect on air quality and a warming impact on the climate. However, other air pollutants have a cooling effect and reducing their emissions could lead to an overall warming result. Furthermore, policy choices in one domain can have harmful effects on the other: for instance, the EU policies, aimed at developing diesel technology in the car industry in order to meet carbon dioxide reduction targets led to an increase in nitrogen oxides and particulate matter pollution in urban areas.[2]

There are clear benefits from a harmonised approach to tackling air pollution and climate change where mitigation measures are assessed for their potential impact on climate, air quality, human health and ecosystems. The key example relates to reducing emissions of short-lived climate pollutants (SLCPs).  Due to their short lifetime in the atmosphere, SLCP emission reductions, especially those of methane and black carbon, could slow the rate of global warming by 0.5°C by 2040. In addition to their warming effect, black carbon and methane have a negative effect on air quality and the environment: reducing these emissions could avoid 2.4 million premature deaths globally by 2030 and have positive impacts on agriculture and ecosystems. Focusing on mitigating SLCP emissions is therefore an attractive option to slow down global and regional warming in the short term, while at the same time improving local air quality.

International law largely treats the two policy goals – slowing down climate change and improving air quality – through separate instruments. This is unsurprising as climate change has traditionally been framed as a global problem, while air pollution has been understood by policy makers as a local or at best a transboundary issue. These different framings have implied that climate change should be addressed through legal instruments of global coverage, whereas air pollution can be effectively mitigated through regional and national/local measures. More recently, however, it has become apparent that the impact of air pollution goes beyond local or regional areas: this includes not only the impact on the climate referred to above but also worsening air quality due to atmospheric transport of air pollution from distant sources. Therefore, the problem of air pollution also requires global approaches.

Looking at international climate law, the 2015 Paris Agreement does not define what specific greenhouse gases or other warming substances it covers and in this sense does not address specifically methane or black carbon. One caveat to this is that the rulebook for the implementation of the Agreement is still under negotiation. The Agreement also contains no references to air pollution, although the connection may be implied from multiple mentions of sustainable development.

At the same time, methane has traditionally been within the scope of the UN Framework Convention on Climate Change (UNFCCC) regime: it is part of national reporting and covered by the Kyoto Protocol’s emissions reduction targets. It has received somewhat less attention though as the main discussion thus far has been on a long-term response to climate change and therefore on reducing carbon dioxide emissions. Black carbon, which is an aerosol and not a greenhouse gas, has not been covered by the UNFCCC regime.

Unlike international climate law, which centres on the UNFCCC regime, international law on air pollution is heavily fragmented. This issue is regulated in an ad hoc fashion through a patchwork of legal instruments covering specific regions, activities and substances. There is no single legal framework with a global reach and prospects for developing one are at present low. Lack of comprehensive and holistic treatment of air pollution in international law results in gaps in geographic, pollutant and pollution source coverage.

Looking across international air pollution frameworks, it can be concluded that these are rarely sensitised against climate impacts of air pollution measures. Air pollution treaties typically refer to transboundary effects of pollution but not to global effects, including climate change. There is for example no comprehensive global coverage of black carbon emissions. A regional exception is the Gothenburg Protocol to the Convention on Long-range Transboundary Air Pollution which was amended in 2012 to include emissions reduction targets for fine particulate matter. Although the black carbon component of these targets is not specified, the parties are encouraged to focus their mitigation action on black carbon rich sectors. The Gothenburg Protocol is thus the only multilateral environmental agreement to include black carbon in its scope. However, the amendment has not entered into force pending ratification by two-thirds of its parties and the geographic scope of the Protocol is in any case limited to Europe and North America.

OPPORTUNITIES TO BRIDGE THE GAP

There are multiple synergies between these two domains of international law which can be advanced for a more coherent approach to climate change and air pollution.

Scientific cooperation and collaboration in inventory development and reporting is one of the key areas. Data and scientific analyses are a fundamental step in developing sound environmental policies, and emission inventories are particularly important for developing national mitigation measures. For instance, scientists say that the best way to maximise climate and air quality benefits is to focus on sources with a high black carbon component rather than on those with a high component of cooling substances.

There are clear synergies between international climate change law and air pollution instruments in terms of inventories. The UNFCCC already has in place a well-developed global reporting framework for methane which air pollution frameworks could capitalise on. For black carbon, current reporting frameworks are fragmented, incomplete and mostly confined to the Northern hemisphere. More generally, global data on air quality as well as particulate matter and black carbon emissions are scarce or unavailable. The problem is especially acute in many developing countries which have poor capacity and systems to monitor air quality. This makes capacity-building activities at the global level crucial.

Another important direction is raising awareness about linkages, co-benefits and trade-offs between climate change and air pollution policies, including with respect to black carbon and methane. In this context, the Climate and Clean Air Coalition (CCAC), which is a public-private partnership led by governments, has already played an important role through scientific assessments and communication of SLCP impacts and potential mitigation actions.

Although the Paris Agreement does not per se integrate air quality concerns, the country-driven approach to mitigation action implies that diverse mitigation efforts can be accommodated under its framework. Potentially any substances, including methane and black carbon, can be incorporated into nationally determined contributions. In fact, many countries have already included methane, several have mentioned SLCPs, and some, such as Mexico and Chile, have specifically mentioned black carbon in their intended nationally determined contributions.

The situation is more complex regarding integrating climate change concerns into air pollution frameworks due to the number of related instruments and their incomprehensive coverage. This for instance means that there is no one single interface on air pollution at the global level which makes institutional cooperation between the policy worlds on climate change and air pollution more difficult. However, several fora have the potential to advance such cooperation, including the abovementioned CCAC as well as international organisations such as the UN Environment, the World Health Organisation and the World Meteorological Organisation.

[1] The blog post is based on the author’s conference paper ‘Climate Change and Air Pollution in International Law: Apart or Together? Short-lived Climate Pollutants in Asia’, which was presented at the Biennial Conference of the Asian Society of International Law in Seoul, August 2017, as well as: Yulia Yamineva and Seita Romppanen, ‘Is Law Failing to Address Air Pollution? Reflections on International and EU Developments’ [Forthcoming in 2017] Review of European, Comparative & International Environmental Law, 26 (3); Yulia Yamineva and Kati Kulovesi, ‘Keeping the Arctic White: The Legal and Governance Landscape for Reducing Short-lived Climate Pollutants in the Arctic Region and Opportunities for Its Future Development’, in review.