By: Germán A. Quimbayo Ruiz

This blog post is dedicated to the memory of all victims of state violence and police brutality in Colombia, their families, and communities. 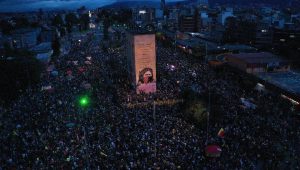 Demonstration at the ‘Héroes’ monument on May 15, 2021, in Bogotá (Photo by Andrés Cardona).

At the moment of publication of this blogpost, Colombia is completing more than 20 days of a National Strike (Paro Nacional) amidst the third and worst wave of the Covid-19 pandemic. Colombians have been on the streets challenging not only a far-right government administration but their actual violent and very unequal social and economic model, which has proven to be more harmful than a pandemic. The current Iván Duque’s government administration, commanded de facto and via Twitter by former president Álvaro Uribe Vélez, has only reinforced such a model. Duque’s administration tax and healthcare reform proposals were only the igniters of the social discontent. Although both reform proposals are temporally withdrawn and former Minister of Finance, Alberto Carrasquilla, has quit due to the protests, the Paro Nacional has always been meaning beyond that. The country has a century-long overdue social awakening.

According to the most recent figures, 72.9% of Colombians (total population: 50 million inhabitants) live in poverty (42,5%) and extreme poverty (30,4%) conditions, with hunger, without health and a terrible education, 25.4% just survive, and only 1.7%, almost 3 million Colombians, are the most privileged. Accumulation of wealth and dispossession by a narco-state, are reasons that explain Colombia is between poverty and misery. The country is transiting in an economic recession already in the making before the pandemic and worsen by its precarious management and a terrible vaccination plan.

The Colombian government expended more budget in militarizing the country during the coronavirus pandemic, in times when peace, reconciliation, economic, humanitarian, and healthcare support should have been the priority. Colombia is the second country (behind Brazil) with the highest military spending in the Latin American and the Caribbean region with 9.2 billion dollars, with historical and large participation of U.S. military and police aid. This situation is aligned with the lack of full implementation of the 2016 Peace Agreement and its progressive rural reforms by the current administration. The current government and its political allies have also been attacking the transitional justice system which is seeking the truth after decades of armed political conflict. Moreover, in terms of security, confrontations and armed violence have been reactivated in several regions, including in the most important port city, Buenaventura. The systematic killing of social and environmental activists and former FARC rebels are also important reasons that explain the social discontent.

Colombia was already in a social uprising before the pandemic (Paro Nacional 2019), but the imposition of one of the most restrictive sanitary measures and quarantines (including curfews) in the world, put a halt to the uprising. Yet, in September 2020 there were some demonstrations that included manifestations against police brutality all over the country that were, unfortunately, marked by more police brutality, with particular and dramatic implications in the Bogotá metropolitan area after the killing of lawyer Javier Ordoñez. Since April 28th, 2021, the Paro Nacional manifested in a multitude of social discontent and political awakening, that, however, have been ferociously attacked by the (para)militarization of cities, the escalation of state violence, and police brutality that has extended to thousands of police violence cases that include around 40 people killed, hundreds of arbitrary detentions and abductions, and a dozen of cases of gender violence and sexual assault. The Paro Nacional committee, protesters and different political sectors reclaim as an imperative to set a police reform and dismantling of the heavy militarized anti-riot unit ESMAD, responsible for several killings and human rights abuses towards civilians still in impunity. Though this type of state violence has been the rule for many in the countryside and the urban marginalized for decades, this time has been unprecedentedly disproportionated against an extended part of the population. Human rights violations have been particularly brutal at night and the turn of the days during the first two weeks in the city of Cali but extended in several other cities and towns including the capital, Bogotá.

To write these words holds up personal grieve and pain, but, at the same time, a certain light of hope I have never seen before. As we discussed in a recent webinar held on May 14 about Finnish media representations on LAC in Covid-19 times organized by ESDLA, there is a morbid attraction in both Finnish and international media and audiences (outside Latin America) about social turmoil and violence based on preconceptions, ignorance, prejudice or even racism. Yet stories of resistance, resilience, and political innovations amidst humanitarian urgencies are less covered. For instance, in these ongoing protests their creative and peaceful character (even outside the country) have been stated, in a country where dissent and difference have been deadly stigmatized and persecuted for decades, even from state and private actors. The use of social media (Twitter, Instagram, etc.), the role of independent media, and NGOs have been key not only to dismantle the pro-government and propagandistic corporate media that demonizes and help to criminalize the right of social protest, but also to be a counter tool to denounce and report constant human rights violations by state and paramilitary forces. Likewise, social media and crowdfunding have been fundamental to support protesters.

On the other hand, in times of planetary climate emergency, there has been very little mention among media and reports on what is the role of the environmental issues in the Paro Nacional. This is extremely important given the megadiverse character of Colombia and the unfortunate trend of the killing and harassment of many environmental defenders who struggle against the national society and economic model. For instance, Colombia has not ratified yet the Escazú Agreement (a broken promise from the Paro Nacional 2019), which represents a light amidst the threatening of environmental activists in the Latin American and the Caribbean region. Moreover, it is (un)surprisingly that after more than two weeks of demonstrations and several human rights violations committed by the state and the police, the government of Iván Duque presents a bill to strengthen the investment of those who intend to exploit gold in an important and strategic ecosystem in the north-east Colombian Andes: the Santurbán Páramo.

Colombia has prominent environmental activist figures like Francia Márquez (who is a candidate for the 2022’s presidential election), Isabel Zuleta, or Francisco Vera, who are representatives of the diversity of Colombian environmental movements (Indigenous, Afrocolombians, peasants, urban movements, children and youth) whom like many others in the “Global South” are often overshadow over their counterparts in the north. A Colombian set of environmental organizations in its National Strike’s official declaration, pointed out eight points that the Colombian government must address: 1) to protect the life of environmental activists and defenders; 2) to ban to the aerial aspersion (using chemicals like glyphosate) of illicit coca crops; 3) to put a halt on a high rocketed deforestation of the Amazon rainforests; 4) to set a moratorium of several mining and extractive megaprojects; 5) banning of fracking prospections and projects; 6) to abide to the right of prior consultation, and local referendums for the developing of those extractive projects; 7) to guarantee of water as a human and ecological right; and 8) to require the de-escalation of megaprojects of all kinds (hydropower, infrastructure, tourism, etc).

In Colombia, a far-right narco-paramilitary regime is challenged by a generation that has lost everything even the fear, and do not want to continue living in such an overt corrupt and oppressive regime and build a new future. A generation that is led on the streets and territories by an impoverished but brave youth at the forefront of the Primera Línea, who are only armed by masks, helmets, sticks and hand-made shields cared by their mothers and community (mostly women). A generation that even has finally started to contest structural racism, internal colonialism, and patriarchy. Statues of conquistadores and colonizers have been dethroned, and monuments and streets have been re-signified. The Colombian Minga also worth mention as an example of resistance when the notion of ‘decolonize’ became an academic token instead of a practice.

On the streets and different territories, democratic institutions are being rethought to overcome extreme inequalities amidst many limitations and the state terror. In the heat of the protests and the warm that brings the assemblies, mingas, or the communitarian pots (ollas comunitarias) that feed the Paro Nacional, local solidarity is the base of this new awakening (‘Despertar’) after years of accumulated grievances. Colombians do not want to keep counting martyrs and unnecessary killings and, instead, seek finally a way of social and environmental justice that has been denied on several attempts towards reconciliation. Struggles for the commons in Colombia seek to rethink democratic institutions through dissent and for the public common’s sake. Therefore, this ongoing awakening need caring attention and international solidarity, since the government administration has never genuinely listened nor meant in doing so, as many are afraid of.

Bio: Germán is from Bogotá, Colombia. He recently finished his Ph.D. in Environmental Policy at the University of Eastern Finland, Joensuu. His work and research are focusing on environment/society relationships and their interplay with urbanization and socio-ecological inequalities, exploring their role in spatial planning practices in the defense of commons such as biodiversity. Before his Ph.D. studies, he worked with local environmental organizations and institutions in Colombia. (gquimbayo@gmail.com).

Research Group based at the Department of Geographical and Historical Studies, University of Eastern Finland, Finland.