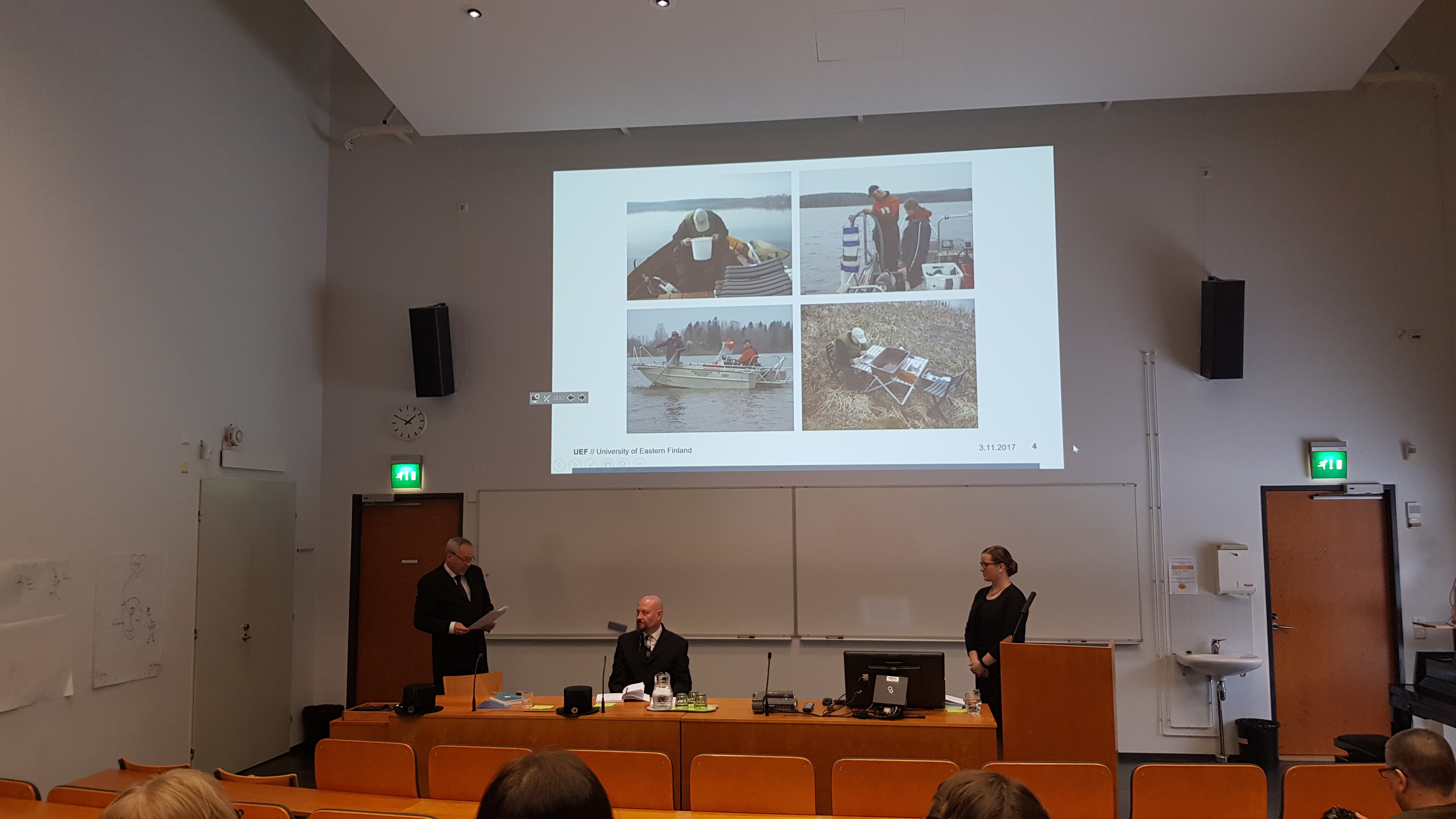 Public examination, or defense, starts always precisely at noon. Rather strict dress code is taken into consideration. Audience enters to the auditorium at 12, and fifteen minutes later, the PhD candidate walks in, together with the custos and the opponent. The examination begins with lectio praecursia, a short introductory lecture about the topic of the dissertation.  After that, the opponent gives a short introduction into the topic. Custos, sitting between the candidate and the opponent, has an important role in the defense: he opens the public examination and is responsible that everything goes by the protocol. Also, he has to make sure that the opponent and candidate do not end up in a fight. During the examination, the opponent makes questions to the candidate – sometimes very easy ones, sometimes rather difficult. The candidate’s task is to answer to the questions as well as he/she can, and to have interactive conversation upon the topic with the opponent.

Finally, after opponent’s final statement, the custos closes the examination. But before that, the doctoral candidate must turn to the audience to ask, if someone has something to say against the thesis. Usually no one raises the hand. In case someone does,  the PhD candidate should politely invite him/her to the karonkka party later in the evening (and the person making the question should politely reject the invitation). Duration of the public examination is normally 2-3 hours, but in the official rules, the opponent can spend up to 5 hours for examining the thesis. After examination, the audience is invited for coffee and cake, or sparkling wine and snacks.  This is normally the moment, when the PhD candidate can breath freely for the first time!!

Karonkka is a well-prepared dinner party in the honor of the opponent, usually held in a restaurant or ball room with a fancy dinner and appropriate drinks. The evening begins with a toast proposed by the PhD candidate, followed by a dinner. Later on, it is time for the speeches. The PhD candidate is  the first one to give a speech and thank everyone who have had a role in the process of thesis making, such as the opponent, custos, supervisors, colleagues, co-authors, friends and family. In this order. There is also an unwritten rule saying that everyone whose name has been mentioned in the speech, must give a speech too. Family members may, however, skip giving the speeches, if they wish. Toasts are proposed between every speech, and the PhD candidate must make sure that the opponent’s glass is never empty. At the same time it is good to take care that your opponent does not drink too much! (Yes, we have also experienced this).

Finally, after the public examination and karonkka are over, the opponent has two weeks to give his or her statement on the thesis and defense. The faculty board must accept the defense and decide on a note: accepted or accepted with honor, which approximately 5% of of the doctoral theses are awarded with. Only after this the candidate can apply for a degree certificate and call him/herself  a doctor.

Universities arrange conferment ceremonies every now and then, approximately once every 5 years. The next ceremony at UEF in Joensuu will take place in 2019. These are 3-day-long celebrations of appreciation for persons who have completed their doctoral degree. Participation is not compulsory, but at least in the past a doctor received a permission to use the doctoral hat (or sword in some faculties) only after being ”promoted” in a doctoral conferment ceremony.

Let us introduce our two newest doctors: Kaisa and Kristiina! (they do not yet have the fancy, doctoral hats) Congratulations!! Who shall be the next?

Text and pictures by Kaisa Figueiredo and Kristiina Väänänen

Sitting in the lab in front of a sewing machine was not exactly what I imagined of doing when I started my PhD in the group of aquatic ecotoxicology. However, sewing two hundred miniature mosquito nets was required before I finished my thesis.

My PhD relates to activated carbon, porous carbon material, which has been studied as a new remediation method for contaminated water ecosystems. Due to its wide surface area, activated carbon can bind numerous contaminants efficiently and lock them in the bottom sediments in a way that they are now longer available for organisms living in the area. Reduced bioavailability of the contaminants for benthic organisms reduces also their transport in the food chain and in time this can reduce the contaminant load to humans from fish consumption. However, both old and new remediation methods, where something is removed or added to the natural ecosystem, can disturb the balance in the field, at least temporarily. Therefore, in this study also direct adverse effects of activated carbon to the benthic organisms were followed.

In our resent work the effects of activated carbon were studied on midge Chironomus riparius. Chironomus riparius is a nonbiting midge, with a four-stage life cycle: egg, larva, pupa and adult midge. Larvae is living in the sediment, and they were grown in activated carbon containing contaminated sediment. After few weeks the larvae develops to flying adult stage, and this is where the mosquito nets come in handy. In order to follow the effects of different exposures to the adult stages, 180 small beakers were sorted on the table and covered with individual mosquito nets, food was provided three times a week and all beakers were monitored daily. All the effort payed off when we finally got the results! We observed that adding activated carbon to the sediment reduces the contamination level not only in the larvae stages but also in the flying adult stages exposed during the larvae stage. We know that the aquatic insects going through metamorphosis can transport the contaminants buried in the bottom sediments to the terrestrial food webs, and our result indicates that adding activated carbon to the sediment may reduce this transport of contaminants! Amongst this we discovered many other cool things, which are published in details in Environmental Science and Technology (2016, 50[10] 5252–5260, DOI: 10.1021/acs.est.6b00991). Check it out, if you are interested in finding out more!

I had a great time working in the croup of aquatic ecotoxicology, but now new adventures are ahead. My PhD project came to an end on December last year when I defended my thesis. The most I am going to miss all the great people I got to work with. A great group of excellent scientist with a catching enthusiasm, innovative to come up with the ideas of 200 miniature mosquito nets, and crazy enough to actually sew them with you!